MUSIC THREE CENTURIES (MUSIK TRE SEKLER) is a website with the ambition of revitalizing Stockholm’s musical life from the 17th, 18th and 19th century. These centuries are the time before sound recordings gave us the opportunity to get a sense of how the music was performed.

The path to understanding and being able to play the music from these centuries traverses a plethora of sources – original notes in manuscripts or prints, writings in music theory and performance praxis, biographical sources, general international and national cultural historical sources.

Herein we wish to welcome you to the music, musicians and milieus from the bygone musical life in Stockholm during these centuries.

Between 1996 and 2008, the Stockholm County Museum produced five CDs with newly recorded music from the three past centuries. They offer resounding instalments of the musical life of Stockholm during the 17th, 18th and 19th centuries - the period preceding the phonograph of the 20th century. The collection exposes and revitalises our common musical roots. Music that would otherwise fade away, as forgotten manuscripts and prints, letters and notes in our public archives and private shelves.

The producers of the project were Ingvar Lundkvist (also project leader) of the Stockholm County Museum and Bernt Malmros, musician, organizer and researcher. Following the fall of 2017, the musical project was entirely relinquished by the County Museum.

The work with research, publication and concerting that Bernt Malmros has made to his living, continues with energetic commitment. It thus follows naturally that Bernt together with Ingvar Lundkvist now reinstate the project work of the musical life of Stockholm from the three centuries.

The website “Music Three Centuries”, which we created during 2019 and published in February 2020, is a natural continuity of this work. It is our aspiration that the website will be able to function as an inspiring addition to general musical research and concert activities.

The faces behind ”Music Three Centuries”

Freelance pianist/harpsichordist/piano/clavichord and organ player, cellist and violinist, educator and musicologist focusing mainly on 17th, 18th and early 19th century music. He has especially taken on music from Sweden, the rest of the Baltic region, Austria and Italy.

Bernt has performed numerous concerts, made TV and radio appearances and recordings in Sweden and abroad, solo or as an ensemble player and accompanist. This has led him to concerts in a myriad of historic sites, in churches, castles, schools, museums, restaurants, parks, embassies and subway stations in Stockholm, Mälardalen, Uppsala, Gotland, southern Sweden, Germany, Italy, the Netherlands, and the USA. Many of the concert venues are recurring, not only in Stockholm and Mälardalen, but also in Germany and Italy.

Some of this activity has ended up on CD. First out was JH Roman “A Portrait in Music” (Proprius 1991). This was followed by the series of five CDs within the project “Music of Stockholm through three centuries” (Stockhomsmusik genom tre sekler) at the Stockholm County Museum beginning in 1996, and the new record series, from 2014, with even more "newly discovered" old music at his own company Ad Cultura, all produced together with Ingvar Lundkvist.

Project manager and producer together with Bernt Malmros in the county museum's long-standing music project “Music of Stockholm through three centuries” with, among other things, five CDs as a result. Also helped Bernt / Ad Cultura with graphic design for four CDs (ACNo1-4).

Home page with information of the latest and most important news, as well as recent changes to the website.

The recorded music is a key part of the website. Therefore, it has been vital for us to ensure that the music can be played on the website, as a complement to the texts and images. Our ambition is that each article or biography should have one or more soundtracks as a form of illustration.

Exposition of the 17th, 18th and 19th centuries

Brief overview of the three centuries with a focus on composers, musicians, singers, poets and others. To the left are three "support columns" with years and events linked to music and politics. Every “name bar” represents one person and their life span, and is clickable for more information about the person in question.

A compilation of mini biographies of noteworthy persons active in the musical life of Stockholm during these centuries, all divided alphabetically into fifteen blocks.

More comprehensive biographies of several extraordinary persons during these centuries. They have in one way or another, left an exceptional mark on the music life of this period.

More extensive articles on various phenomena related to the musical development during the 17th, 18th and 19th centuries.

Here we present several records, as good representatives of the music of the three centuries. We introduce the music, the artists, the song lists, the producers and possible access to each record.

Here we present every month a new illustration, drawing, painting or quote with satirical or otherwise enlivening content. Under the heading "Older Bon Mots" you will find all the Bon Mots that previously have been published.

Here we present numerous links to websites that may be of use to anyone interested in music and history.

ABOUT US / OM OSS

Here we introduce the website; the creators; GDPR; copyrights for images, texts, etc.; the background to the website; our newsletter, T-shirt and a contact form for viewpoints and orders. 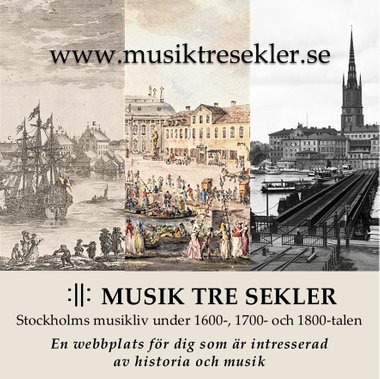 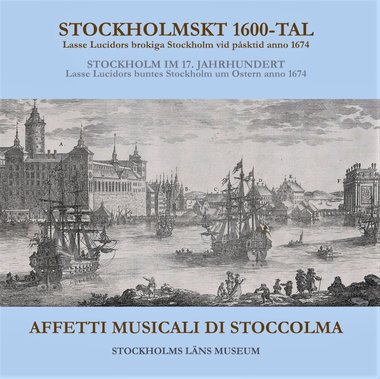 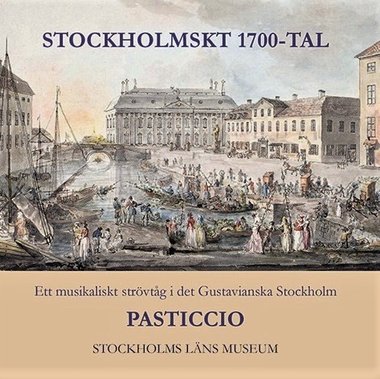 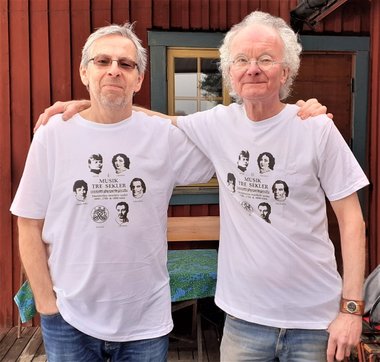 Soundtracks below - three examples, one from each century

"I dalen / In the valley" by Adolf Fredrik Lindblad. Performed by Bernt Malmros, piano and Anna Nyhlin, soprano. Track #11 on Mathilda Orozco